Anne of the Foreign Service

On 6 April 2013, Anne Smedinghoff, a 25-year old U.S. diplomat working in Afghanistan, was killed in a car bombing. I never met Anne, but know her well. I know her from my years in the U.S. Foreign Service, working alongside the young—and not so young, but still idealistic and eager—officers who strive to bring the best of America to those outside our borders.

The Annes of the Foreign Service are crucial contributors to America’s well-being and safety in the shrinking world in which we live. I know I have countrymen who, recognizing that we Americans have problems of our own, believe we shouldn’t be spending our dwindling dollars or our energies on people outside our borders, but my experience leads me to believe that this school of thought is both shortsighted and dangerous.

The peoples of the world who are poorly educated and have limited exposure to anything outside their local communities know Americans almost entirely by our TV shows, movies and music. The entertainment industry speaks for us—our values, our way of life—more than anything else we do. You might have to think about that for a minute to fully understand how the developing world sees us.

When I worked in Ghana, West Africa, I frequently had to dispel the very common belief that American life is just like an episode of “Baywatch!” Really! Now, I’m not disparaging “Buffy the Vampire Slayer,” “The Dark Knight Rises,” or the lyrics of our popular music, but we Americans know how much is fantasy and how little is fact. People who only know us by these measures assume they speak a truth about us.

So, how does this relate to Anne Smedinghoff and the cadre of American Foreign Service representatives who work around the world? They are the true representatives of an American people who are some of the most hardworking, charitable, and freedom-respecting people on the planet. Anne was delivering schoolbooks to a village that had none so that its children could receive an education and have a better future. Her colleagues move out from their respective embassies and consulates daily—in every corner of the globe—to assist, educate, counsel, and affect peace and understanding. Please do not confuse your political views with the aspirations and intentions of the U.S. Foreign Service, which exists to serve the American people through diplomatic means and by being nonpolitical.

The loss of Anne Smedinghoff is a loss to her family and her country, though most of her countrymen don’t know how much of a loss her death is. We need many, many Annes to demonstrate true American values to the world, and the money, time, and effort we spend doing it is the very best way we can possibly spend those commodities. The future of our children may well depend on it.

For Reflections on Nursing Leadership (RNL), published by the Honor Society of Nursing, Sigma Theta Tau International.
Posted by EditorRNL at 6:00 PM

I’m Judie Pruett, a nurse practitioner employed by the U.S. State Department. My job has taken me around the world, and I’m presently living in Karachi, Pakistan. I hope you enjoy my blog. 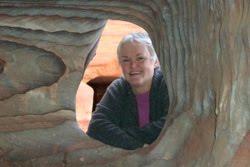 Judie Pruett, NPC, MSN, at one of the world's great wonders, Petra in Jordan, a UNESCO world heritage site.